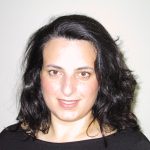 Vana Kalogeraki is leading the Distributed and Real-Time Systems research at the Athens University of Economics and Business. Previously she has held positions as an Associate and Assistant Professor at the Department of Computer Science at the University of California, Riverside and as a Research Scientist at Hewlett-Packard Labs in Palo Alto, CA. Prof. Vana Kalogeraki received her PhD from the University of California, Santa Barbara in 2000. She holds an M.S. and a B.S. from the University of Crete, Greece. Prof. Kalogeraki has been working in the field of distributed and real-time systems, participatory sensing systems, distributed sensor systems, peer-to-peer systems, resource management and fault-tolerance for over 15 years. She has published over 100 journal and conference papers and contributions to books. She has co-authored the Object Management Group (OMG) CORBA Dynamic Scheduling Standard (together with Eternal Systems, Lockheed Martin, Objective Interface Systems, Tri-Pacific Software, Vertel Corporation and Mitre Corporation). Prof. Kalogeraki was invited to give keynote talks at DNCMS 2012, SN2AE 2012, PETRA 2011, DBISP2P 2006 and MLSN 2006 in the areas of participatory sensing systems and sensor network middleware. She has delivered tutorials and seminars on peer-to-peer computing. She has served as the General co-Chair of SEUS 2009, the General co-Chair of WPDRTS 2006 and as a Program co-Chair of MDM 2011, ISORC 2009, ISORC 2007, ICPS 2005, WPDRTS 2005 and DBISP2P 2003, a Demo Chair for IEEE MDM 2012, in addition to other roles such as Area Chair (IEEE ICDCS 2012) and as program committee member on over 100 conferences. She was also awarded a Marie Curie Fellowship, two best paper awards at the 24th IEEE International Parallel and Distributed Processing Symposium (IPDPS 2009) and the 9th IEEE Annual International Symposium on Applications and the Internet (SAINT 2008), a Best Student Paper Award at the 11th IEEE/IPSJ International Symposium on Applications and the Internet (SAINT 2011), a UC Regents Fellowship Award, UC Academic Senate Research Awards and a research award from HP Labs. Her research has been supported by an ERC Starting Independent Researcher Grant, the European Union, joint EU/Greek “Aristeia” grant, a joint EU/Greek “Thalis” grant, NSF and gifts from SUN and Nokia. She has been an Associate Editor for the Transactions on Mobile Computing Journal, the Computer Standards & Interfaces Journal, the Peer-to-Peer Networking and Applications Journal and the Ad hoc Networks Journal.